The Gentrification of Basketball 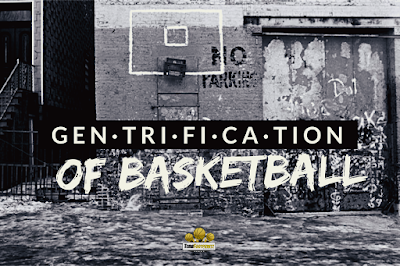 The above quote is from an informal phone conversation that our Mark Williams had with one of the country’s leading voices in girls’ basketball in 2015.  Although at the time such talk sounded “weird” for it did not fit the history of basketball.  Basketball was/is an urban sport for several reasons but none more important than the required co$ts attached to the game founded by a Dr.James Naismith. From the onset it became obvious that basketball, unlike other sports, requires very little equipment which makes it appealing to pretty much any and everyone. As evident by Dr. Naismith, simply nailing a peach basket to an old barn’s wall.

Not too long ago, HBO’s “Real Sports” did a segment where it highlighted youth sports as a 9 BILLION dollar industry.  In the 2017 episode, a “traditional family” spent on average of $15,000 each year for their two children to train and participate in youth sports.  (the number does not include food, travel, uniform and equipment)  Although the INVESTMENT seems out of sorts, it is pale in comparison to the ever growing costs of a college education.

Just think about basketball from the 80’s & 90’s where the “teams” were made up of local (park) players (who lacked disposable income) had an “old” person would simply take players to tournaments and incurred all financial responsibilities.  In doing so, teams which became programs only selected the best players who competed for personal pride and territorial respect.

Now fast forward to the late 2000’s.  On a daily basis new teams appear and no longer are they led by an “old” person who handled all the finances for the local (park) players (who lacked disposable income) have been replaced by families who are willing to pay programs for training, travel, tournaments, and all associated fees.  This concept has been called “Gentrification of Youth Sports”.

Like with gentrification of neighborhoods - the people who built and maintained the local ethos are “priced out” and only those that have the financial resources are able to live in the newly curated environment.  As a result, players who lack re$ources are rarely on (highly competitive) travel teams where colleges / universities will be able to offer FULL scholarship opportunities.

In conclusion, the Gentrification of Basketball has become a REALity.

Kids gotta be motivated to go to Youtube and get all the training they need. Set a schedule and use the free playground at 6-9am when no one is out there. Watch the post of folks spending money and incorporate that into your training. Truth is parents could form their one team and play in regional tournaments. And be honest-folks spend money on what's important them! Show me your bank account and I'll tell you what's important to you. Solutions are out there. Even if that all stud team is beating you-somebody will see something in some of the players on the other side of the scoreboard. Everyone can't recruit the top 100 and don't. Greater obstacles have been defeated. Do what you can and I know God will do the rest!

Sounds good however you failed to mention the actual reason for the mentioned "solutions". There is no doubt the costs attached to "travel basketball" are shutting out some very talented players.