The need for COMPETITION. 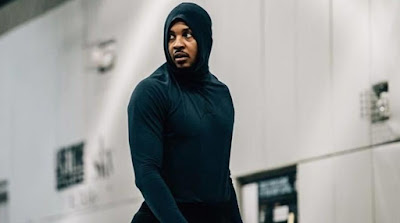 It seems that everyone via various social media platforms is enthralled with "Hoodie Melo" and his super exclusive "pick up run".  We would be the first to admit that we have nothing but respect for the professional players who are willing to use the "off season" as an opportunity to challenge themselves against the "best".

For the younger generation this is nothing new for Michael Jordan had his "Breakfast Club (6am workouts), Magic Johnson organized the "UCLA Run" and in the NYC area Jim Couch oversaw his legendary NYC runs and as of late our Mark Williams and NYAC's Milton Lee / Ross Burns organize a "private invite only run" however the difference in yesteryear's runs compared today's is access.  It is no secret that today's world is social media driven which allows "lay people" the opportunity to see/touch today's athlete as they go through their "normal" life unlike the pre social media "runs" of "back in the days". Such access allows for some to say social media is both a gift and curse, however with the amount of "knowledge" we are slightly confused on competitiveness of today's budding athlete.

There is no doubt that today's athlete is social media savvy yet they appear to miss the overall point of the phrase "IRON SHARPENS IRON". Instead, they enjoy watching players compete but they, themselves, lack the intensity fortitude to actually push beyond their personal state of "normalcy".  This mindset seems odd especially for players with the expectation of making a team, earning college offer, securing a scholarship, and / or garnering professional opportunities.

As a basketball training company we would love to train players on a individual (1 on 1) basis, however it is our belief this is NOT the best practice for players who are looking for 100% development.  From our vantage point, to obtain optimal development the following formula must be adhered to.

In short, in order to effectively grow as a player/person one must COMPETE.  Hiding from competition will only provide a player with a false sense of reality and ultimately create a pseudo self image that can lead to failure as he/she elevates to the "next level".  As famed fashion designer Gianni Versace stated, "It is nice to have a valid competition: it pushes you to do better"

Posted by Elite Basketball Training at 12:31 AM